On 11 September 2022, Swedish voters will elect their new Parliament. In this article, our colleague Margaux Plurien reviews the current polls and the potential impact of the vote on the upcoming Swedish EU presidency.

2022 is on course to be one of the most violent years in Sweden: gangs shootings have recently made the headlines, crystallizing the debates on security issues. Mid-August official statistics show that 44 people have been shot dead in the country this year and 66 wounded. In all of 2021, 45 people were shot dead with 115 injured. The past year also saw an increase in international instability, with Russian President Vladimir Putin issuing a warning to Sweden and Finland past June, after both countries applied to join NATO. 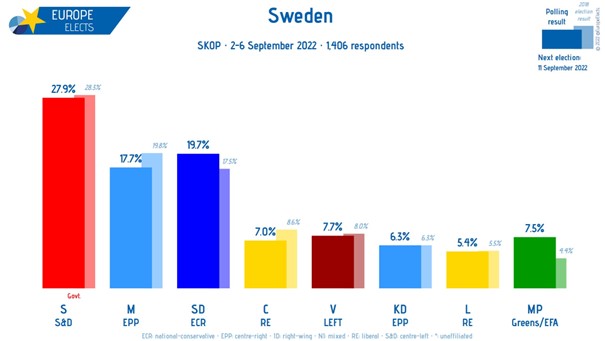 Swedish General elections take place every 4 years and will select the  349 members of the Swedish parliament, the Riksdag. Regional and municipal elections are also scheduled on Sunday 11 September. Interestingly, if an early vote is available, citizens can still change their minds and modify their votes until the official election day. Hence, campaigning until the last minute will be key.

Current polls favour the re-election of a Social Democrats majority, closely followed by the Sweden Democrats. Polls are currently tight, and the main tug is expected between current Social Democrat Prime Minister Magdalena Andersson and her main rival, the centre-right Moderate Party leader Ulf Kristersson. Ulf Kristersson, among others, is campaigning under slogans such as “Now we’ll get Sweden in order” and “Ready to fight crime.”

If Andersson’s party wins, the Social Democrats should be able to form a stable coalition bloc with other left and centrist parties. But a right-wing coalition government led by either the Moderates or by the surging far-right party the “Sweden Democrats” is also on the table. Jimmie Åkesson is the current leader of Sweden Democrats and has been a member of the Riksdag for more than a decade.  Sweden Democrats have shifted their opinions on the European Union under his leadership and there's no more real talk of a Swedish EU exit - Swexit - but instead, he wants to see it as a union of nation states with an emphasis on trade.

Potential impact on the EU Presidency

The EU presidency, which consists of a 6-month rotation, drives forward the Council’s work on EU legislation. The two main tasks of the Presidency are to plan and chair the meetings of the Council and its preparatory bodies and to represent the Council in its relations with other EU institutions.

At the EU’s General Affairs Council meeting on 14 December, the ministers for EU affairs approved the overall political direction for the French, Czech and Swedish Presidencies of the Council – known as the 18-month programme. The trio Presidency took over in January 2022, and Sweden will lead the work of the Council between 1 January and 30 June 2023.

The current hot topic will most likely be energy. Sweden has already announced on 4 September that it will offer billions of euros in liquidity guarantees to its power companies, after Russia’s Gazprom shut the Nord Stream 1 gas pipeline, deepening Europe’s energy crisis. At the EU level, energy ministers are currently discussing potential price caps and emergency credit lines. Sweden will take over the EU Presidency in the heart of winter, and will have to continue the efforts of the Czech Presidency in ensuring the transition from Russian supplies.

In parallel, the EU’s flagship climate and energy transition legislation package, Fit for 55, is currently entering the last stage of negotiations. Trialogues talks are starting in the coming week, including talks on the reform of the carbon markets and a new Carbon Border Tax (CBAM).

Schuttelaar & Partners will closely follow the negotiations, along with the impact of the Ukrainian conflict on food and agriculture prices. Fertilizer prices are high, while the summer droughts are expected to add to the current inflation. On 22 June 2022, the European Commission tabled a proposal for a regulation on the sustainable use of pesticides, which sets legally binding targets at the EU level to reduce by 50 % the use and the risk of chemical pesticides as well as the use of the more hazardous pesticides by 2030.